As Association Council reps, Luchara and Andrew serve not only their department faculty but the entire WMU-AAUP bargaining unit, routinely going far beyond what is asked or expected of them in their elected roles. Their efforts strengthen the chapter and improve the quality of life on campus for all faculty. 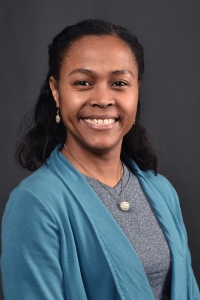 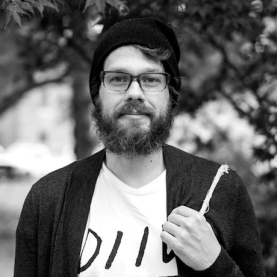 The WMU-AAUP Chapter is fortunate to have an exceptional group of faculty serving on the Association Council, with representation from every academic unit and a deep bench of seasoned and emerging union leaders, including Luchara and Andrew. They are part of a core group of our most active AC reps who can always be counted on to join us on the front lines when it comes to defending the contract, fighting to preserve and strengthen academic freedom and shared governance rights, and working to maintain and enhance the quality of our professional lives. This work takes resourcefulness, stamina, courage, and above all a calling to serve others. And they do most of it when nobody’s looking, all of it without extra compensation or release time, and usually with only a fraction of the appreciation and recognition they deserve.

A conversation with President Montgomery
Friday, January 19, 3:305 p.m. in 157 Bernhard 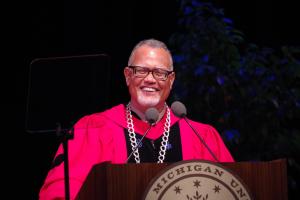 The WMU-AAUP will host WMU President Ed Montgomery this afternoon (Friday, January 19), for a conversation in which all WMU-AAUP bargaining-unit faculty are invited to participate. We expect that President Montgomery will offer brief opening remarks, and then we will open the floor to questions and conversation.

Please join us today from 3:30 to 5 p.m. in 157 Bernhard for this opportunity to have our university president’s ear at an event where attendance is limited to the Board-appointed faculty.

Looking forward to seeing everyone this afternoon!

Letter to the faculty from WMU-AAUP President Lisa Minnick

After a lengthy and intense discussion at the WMU-AAUP Association Council meeting last Friday, the AC voted to draft a resolution to express support for WMU students in response to disturbing incidents that have occurred on our own campus and others over the past week.

Once drafted and circulated, the proposed resolution was approved 44 to 1 in a secret-ballot vote (plus one abstention) of the WMU-AAUP Association Council, Executive Committee, and officers, who now recommend full faculty approval. All members of the WMU-AAUP bargaining unit will soon receive an electronic ballot to vote on whether to approve.

Click here for the text of the proposed WMU-AAUP Resolution in Solidarity with Western Michigan University Students.

As most of you are aware, many of our students have reported feeling unwelcome, vulnerable, and even fearful for their safety and wellbeing or for the safety of classmates. Students of color, LGBT students, international students, and other minority students report feeling particularly vulnerable since the presidential election last week.

At a student-organized meeting on campus on November 10, I listened to what many of these students had to say. Their reports were chilling and disheartening: Some of our LGBT students said they will not be going home for Thanksgiving next week because family members have told them that they are not welcome, or they are afraid to go home because of concerns about increased hostility from relatives who do not accept their sexual orientation or gender identity. International and immigrant students report that they are fearful of attacks and deportation. More recently, some students have reported harassment on the street or on campus and finding notes on their cars with racial or homophobic epithets.

In other contexts, I have had occasion to observe that the intellectual character of a university is determined by its faculty. While that is critically important to our role at Western Michigan University, intellectual character is not the only kind of character that matters, nor is it the only kind that faculty model regularly for our students and community, even though we may not always be fully aware that we are doing so. Our ethical principles and moral convictions are critical to our work as faculty members, and never more so than when they are being tested, as they are now.

Listening to these students at the meeting last Thursday, it occurred to me that they might appreciate a reminder of how seriously we take our charge to do right by them, not only intellectually but also as the mentors and role models we are for them.

I brought this topic to the Association Council last Friday, and the result of that conversation – which was intense, passionate, painful at times, but also inspiring – is the proposed Resolution in Solidarity we present now for your consideration.

We understand that some of our colleagues may not be comfortable with this resolution or its intentions. We hope that you will be willing to engage in a dialogue about how we can best honor our commitments to one another as a faculty as well as to our students at a time when some of them feel that they have reason to be afraid for their lives.

The next meeting of the WMU-AAUP Association Council is Friday, January 20, 2017, at 1:30 p.m. Association Council meetings are open to all bargaining-unit members, and we encourage you to join us on January 20 so that we can all listen to and talk about the diverse perspectives our colleagues bring to these issues. We’ll meet in 157 Bernhard.

As individuals, we don’t need to have felt unsafe ourselves to understand why it is important to make a public statement in solidarity with our students. Even those of us who have never been targeted or felt vulnerable because of the color of our skin, gender, sexual orientation or gender identity, disability, national origin, or religious beliefs can of course empathize with those who have. And sadly, many of our faculty colleagues have felt this way themselves, including right here on our own campus. It is important that we stand with these colleagues, and I look forward to our conversations in the near future – and I hope at the January 20 AC meeting – about how we can all do a better job of that.

But today I am asking you to consider the proposed WMU-AAUP Resolution in Solidarity with Western Michigan University Students.

The Association Council and I understand also that there may be concerns about the possibility of causing hurt or distress to students who may not be members of protected groups but who may also fear backlash because of their political beliefs. We share these concerns and have crafted the resolution to try to make clear that we are here for all Western Michigan University students, even while we are also trying to address the immediate safety concerns that disproportionately affect students of color, LGBT students, and international students.

Many thanks in advance for your thoughtful consideration of this important matter.

Recommended by the WMU-AAUP Association Council, Executive Committee, and officers, for the faculty’s consideration. WMU-AAUP bargaining-unit members are now voting on this proposal, with votes due electronically by 4 p.m. on Friday, November 18. More information about the proposed resolution is available by clicking here.

Whereas the Board-appointed faculty of Western Michigan University, represented by our collective-bargaining chapter of the American Association of University Professors, stands for academic excellence, shared governance, higher education as a public good, and academic freedom;

Whereas this work is foundational to the development of our students as knowledgeable and engaged citizens, informed participants in the democratic process, and possessors of a spirit of tolerance and acceptance;

Whereas the intellectual character of a university is determined by its faculty;

Whereas the faculty therefore also appropriately models character for our students and for the community in other ways, including with respect to our ethical principles and moral convictions;

Whereas these values inform our understanding and acceptance of the immense and humbling responsibility that we carry in the form of our students’ trust in us: that we will treat them with respect, with fairness, with compassion, and with generosity of spirit;

Whereas the faculty takes seriously its role in modeling, teaching, and facilitating critical thinking and respectful discourse;

Whereas we recognize the challenges inherent in the exploration of controversial issues and ideas as well as the intellectual growth that can result from engaging these ideas respectfully and thinking critically about them;

Whereas every student is welcome at Western Michigan University and deserves to feel accepted, included, empowered, and safe here;

Be it resolved that the Board-appointed faculty of Western Michigan University, individually and collectively, stands in solidarity with the students of this university and extends to them our attention, our understanding, our support, our advocacy, and – when and if they need it – our protection, at this singular moment in our nation’s history and always.