On May 9, our WMU-AAUP negotiation team returned to the table following the semester break. The teams have been at the bargaining table every Tuesday and Thursday, with our team also meeting frequently away from the table to draft and respond to proposal language and to consult with the WMU-AAUP Executive Committee.

Cynthia, Whitney, Bruce, Jeremy, and Mike have been working tirelessly for months, and they’ve made a lot of progress at the table since negotiations got underway on March 13. That means there’s a lot to report, including great news about intellectual property rights and protections, major improvements to the tenure and promotion process for Faculty Specialists, and updates on key issues now on the table.

I. The teams have reached tentative agreements (TAs) on the following articles:

II. On the table: Paid parental leave, workload,
and evaluation of professional competence.

Our WMU-AAUP team has presented a strong proposal for paid parental leave (Article 27: Leaves of Absence). The teams continue to negotiate this topic along with proposals on Article 42: Workload and Article 16: Evaluation of Professional Competence. These have been contentious issues on our campus, so please stand by for calls to support our team as needed.

At the bargaining sessions on May 16 and 18, the administration’s team and their representatives presented reports on the university’s budget and projected health care costs. Our team reviewed the documents carefully and compared them with analyses conducted for and by the WMU-AAUP. On May 23, after consulting the Executive Committee, the team presented the chapter’s proposals for Article 32: Economic Compensation and Article 33: Health Care Benefits.

These proposals will be discussed in upcoming sessions, so stay tuned for more information and calls to action that may become necessary as the dialogue on these critical issues moves forward.

Cynthia, Whitney, Bruce, Jeremy, and Mike have been giving their all at the table, and it is paying off for the faculty in the improved contract language and impressive progress they’ve made so far (and so quickly) in achieving tentative agreements.

But bargaining at the table is not all they do. Many colleagues may not realize the time commitment or the amount of energy and dedication their service on the bargaining team demands. Yes, they spend long hours at the table, including in high-pressure situations that can be intense and exhausting. But they also spend many more hours away from the table conducting research into key issues (such as healthcare and compensation), drafting contract language and proposals, meeting with faculty to get input and guidance, consulting frequently with the WMU-AAUP leadership and Executive Committee, working with the chapter attorney and other experts, and many other tasks, large and small. This work requires team members to put aside other things in their lives that are important to them. They make this choice because they’re committed to improving the professional lives of the nearly 900 members of the WMU-AAUP.

So, please take a moment to drop them a note of thanks, or a shout-out on social media, to tell them how much you appreciate them. (The WMU-AAUP is on Twitter, Facebook, and Instagram.)

And when the call comes to stand up, show up, and speak up, we need you to be ready to do it. Our 2017 team is one of the strongest and best prepared in the chapter’s history, and they are giving 100 percent every day. But without the visible, vocal support of the faculty, there is only so much that anyone can achieve at the bargaining table. Our leverage is in our numbers. Faculty support for our team is what keeps the pressure on the other side.

We will get the contract we show up for and demand.
Be ready to stand with our team when they need you. 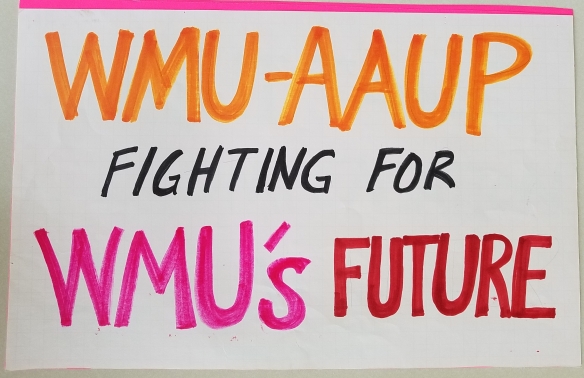 Save the date: June 23
Join us at 5 p.m. on June 23 for the next Fourth Friday Happy Hour. Build solidarity and enjoy the company of faculty colleagues in a fun and family-friendly environment. As always, your first drink’s on us if you’re a dues-paying member. Arcadia Brewing Company, 701 E. Michigan Ave.