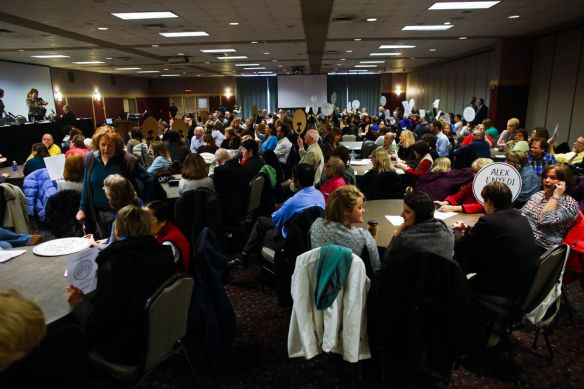 First, a few words in support of our support staff colleagues in their efforts in pursuit of pay equity. We have a situation on campus in which some of our support workers are making eleven dollars and fifty cents an hour after eight or ten years of service to the university, some who are only making a dollar an hour more now than when they started here five years ago or even ten years ago, and even some – brace yourselves for this one – some who have served this university for 20, 25, and even 30 or more years but are still making only 12 or $13 an hour.

As president of the WMU-AAUP, my constituency is the board-appointed faculty, not the support staff, and not the dean. So in a way it seems right that my usual speaking slot on the board’s agenda has been eliminated as of today – and it was left to a support staff colleague to have to break that news – because right now I am speaking not as the president of the faculty union but simply as a faculty member, and as a member of the community of people who are this university, and as a colleague and friend of the mostly women but also a few men who do the difficult and indispensable but often invisible and underappreciated work of keeping our offices running smoothly and functioning effectively.

This is my eleventh year of service to Western Michigan University, and I could not be more proud of our students or have more respect and admiration for my faculty and staff colleagues. But today, as I stand here as the elected representative of the 870 members of the board-appointed faculty – and I won my re-election in November with nearly 70 percent of the vote – as I stand here speaking during the public comments, rather than alongside the other faculty and student leaders, I have to say that I am disappointed.

Last semester, members of the board, you extended President Dunn’s contract and increased his salary. In doing so, Chair Hettinger, you rightly cited the need for stability on campus during a time that is transitional for us, for the state, and for the country, and you correctly noted the importance of steady leadership in such times.

That is exactly what we have in Dean Enyedi, whose leadership of the largest college on campus has demonstrated precisely those qualities that we should be seeking out, developing, and rewarding in our leaders: vision, transparency, creativity, accountability, respect for the faculty and staff who do the work of the college and for the students we serve, and above all, that elusive quality of competence. How can we afford to remove an outstanding, effective leader and risk destabilizing the largest and one of the most productive colleges on campus? I am calling on you, Provost Greene, President Dunn, and members of the board, to reverse this decision, which goes against the wishes and judgment of 91 percent of the faculty in the College of Arts and Sciences, who answered yes to the question of whether Dean Enyedi should be kept on in their evaluation of the dean, conducted by the WMU-AAUP.

To conclude, members of the board, I am asking you to give our support staff colleagues a fair hearing and to reconsider the termination of one of the most competent, ethical, and respected administrators on this campus.